Why Should I Visit the District of Rimac?

Why Should I Visit the District of Rimac? 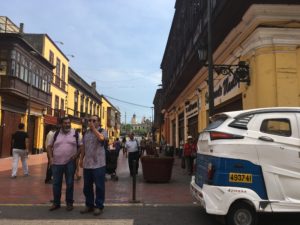 Rimac is one of the 43 districts of the city of Lima and it is next to the Historic area which is a World Heritage Centre by UNESCO.

Eager to be explored, Rimac has been embellished even more since 2015 when it became a member of the Organization of World Heritage Cities, a group encouraging co-operation and exchange of expertise to conserve and manage the member cities.   The next General Assembly will be held in Rimac this coming May 2018.  The Mayors of the 300 cities in the World Heritage Cities members will meet here.

Rimac will attract more when the project of a cable car at the San Cristobal Hill will be done. This is a project that has been on the table since 2007 and there are mutterings that it will be ready by the end of 2018.

Rimac has several rich historical sites, streets, and monuments that make a very worthy visit to do.   To highlight the most important ones, and in my point of view, the most representative of the district is the Convento de los Descalzos done by the end of XVI century. It is very well maintained and keeps much of the furniture, decoration, art, household furnishings and where you can revive the viceroyal times.  Together with the Convento de los Descalzos, Rimac has one of the most elegant walking streets in the area, Jr. Trujillo, with colonial balconies and the smallest chapel in the world, Nuestra Señora del Rosario, with 8 meters width and 12 meters long, it is part of the San Lazaro Church, only half walk away.   Jr. Trujillo takes you directly to the bridge that crosses the Rimac River taking you behind the Government Palace.

The Alameda de los Descalzos is an elegant avenue constructed in 1611 by Viceroy Juan de Mendoza y Luna, Marquis of Montesclaros. Together with Paseo de Aguas which was constructed in 1770 by Viceroy Manuel de Amat y Juniet.  The Alameda de los Descalzos has 6 small sculptures and other big 12 marble sculptures that are related to the zodiac and the Greek gods.  In 1856 it was refurbished with the installation of a wrought-iron fence imported from England and large entrance gates.   This together with marble benches and gardens with beautiful flowers, makes it a urban beauty in the area. The Paseo de las Aguas is very near the “Plaza de Toros de Acho”, bullring built in the colonial times. The park has a big arch as an entrance, gardens, and water fountains.

Finally, in the Alameda de los Descalzos there is a new great spot to have the best of Peruvian food, in a house that was owned by Viceroy Amat y Juniet.  The place has been carefully refurbished during two years following the requirements of being in a protected area.  Casona Amat has recently opened their doors to close the circle of the great attractions in the district of Rimac.

Previous postA Hidden Gem in Lima
Next postIn which area should I book my stay in Lima?